I’m sharing some tips on Romancing Your Readers Like a Romantic Comedy in celebration of Her Hometown Reporter releasing May 1st.

So, jump on over to Seekerville with this link http://www.seekerville.blogspot.com/2015/04/romancing-your-readers-like-romantic.html and share with us your favorite romantic comedy or your favorite couple from either a book or rom-com. My “to be watched” list is growing and growing.

I can’t wait to see what your favorites are.

And here’s a little teaser from the inside cover of Gina and Toby’s story. 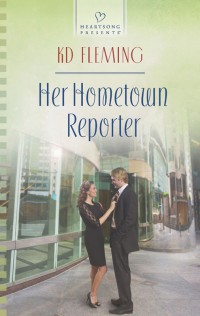 He’d shaken her trust in him.

Gina wasn’t willing to tread a path that could collapse beneath her feet. And believing Toby’s story was too big a hazard. He’d made her care about him. She wouldn’t give him the power to break her, too.

“It’s a nice story. Almost as touching as the one you wrote about the senator and the prayer journal. But I can’t afford to believe you. Trust isn’t part of a five-year plan. It’s a commitment, a loyalty that lasts forever. And I’m a forever kind of girl. You’re a short-term kind of guy. It was fun fighting with you, but then, it was all just a game to you wasn’t it? Congratulations, you win.” She kept her eyes open against the cold sting of tears, knowing that if she blinked they’d escape, and then he’d know how much he’d almost won.

He reached out and cupped her cheek. “If I’ve won, then why does it feel like I’m losing my best friend?” 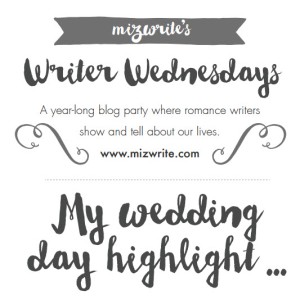 They say that it takes six weeks before a repetitive action becomes a habit. We shall see. I have signed on to participate is a 16 member blog roll. We’re going to pick a topic each month and on Wednesdays we’re going to reveal a little something about ourselves to you and you can in turn, share your experiences in the comments section. There will be a full list of all the participants at the end of my post and they should include hyperlinks, so all you have to do is click on the link and you will be on your way along the super highway of the internet to some fun and happy real life events.

I will start with the time of day we held the ceremony and reception. I’m from the South–SEC Football and Basketball–South. I wanted an April wedding but my hubby talked me into waiting until September. Then as we were deciding the time for the ceremony, he didn’t want to wear a tuxedo so it had to be before 6 pm. I even wore a gown that was tea-length so he wouldn’t be underdressed.

I wanted it at 4 pm. He explained that we needed to hold the service at 2 and start the reception right away. I thought it was so sweet that he had such a specific opinion about the timing of the ceremony. Until——he said we had to get the reception over with quickly because Florida was playing Tennessee at six o’clock and most people would want to get home for the game. Even his groom’s cake looked like a college football field, so you know he was one of those “most people.” (Please don’t think he’s all bad, there were several people we invited who said the reason they couldn’t attend was because they already had tickets to the game.)

The wedding was special and the reception was a time of celebration even if most of the men there kept a close eye on their watches.

BUT THE MORE INTERESTING QUESTION TO ASK IS:  What are some of the memorable highlights from your wedding?  Please share below in the comments.

And even though June is thought of as the month for weddings, we chose April because the awesomely talented Kat Cantrell has TWO books releasing this month that relate to weddings. Here’s the scoop.

FROM EX TO ETERNITY:

FROM FAKE TO FOREVER:

And…if you’re curious about what we’ll be blogging about over the next year, here’s the line up:

Don’t forget to drop by the other bloggers’ sites and find out what happened on their special day.

Reading, Writing, and Rambling Through Life

The latest news on WordPress.com and the WordPress community.